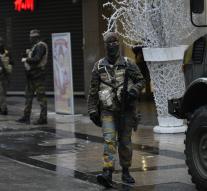 brussels - Special units of the Belgian police have four people arrested Saturday at the Grand Sablon in the heart of the city. The four were in a suspicious car, said a spokesman.

It is not yet known what connection do the arrests with the increased terrorist threat in and around the city.

US Embassy in Belgium has called compatriots in Brussels to not go out the door.,null, If you do go outside, avoid large crowds, '' warns the embassy.

All subway lines have been shut down, there is extra police on the streets and many events, concerts and sporting events are canceled. Also tourist attractions such as the Atomium and museums are closed. Also many shops are not opened or will close prematurely. In the streets driving military vehicles.

According to Prime Minister Charles Michel applicable safety still until Sunday afternoon. Sunday comes again the Belgian Security Council meeting, which besides the Prime Minister, the Ministers of Interior, Justice, Defence and Foreign Affairs have seat. Then the situation will be reviewed.