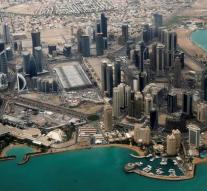 dubai - Saudi Arabia, Egypt, Bahrain and the United Arab Emirates broke all diplomatic relations with neighboring Qatar on Monday. The countries accuse Qatar of maintaining ties with terrorist groups and destabilizing the region.

The joint action means that the countries break the air, land and sea contacts. This means, inter alia, a travel ban to and from Qatar. Qatar diplomats have got 48 hours to leave.

According to Saudi state press office, it was decided to protect the kingdom, 'against the dangers of terrorism and extremism.' The country called on other countries to do the same and closed the boundaries with the Gulf State.

According to the Saudi kingdom, Qatar supports shiite militants who also receive support from arch enemy Iran. They would be active in Bahrain and in eastern Saudi Arabia. Bahrain also announced that Doha was concerned with domestic affairs in Bahrain.

According to Egypt, Qatar supports the Muslim Brotherhood, which is seen by the government of President Abdel Fattah al-Sisi as a terrorist movement. The organization claims itself to be peace-loving. Egypt includes its ports and airports for Qatar transport.