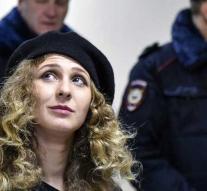 groningen - Co-founder Maria Alyokhina of the activist Russian punk rock band Pussy Riot hopes to perform in De Oosterpoort in Groningen in January. She has a program in which she tells others about the original group, which in 2012 made the world press with a protest in a church in Moscow against the conditions under which Russian elections were held. The action against church and Kremlin gave her a prison sentence.

The Oosterpoort announced its arrival on Thursday, just as international media reports that Alyokhina is not allowed to travel to the Fringe Festival in Edinburgh. That is short on new protests that she would have heard, including against the regime in prisons, which you also find very easy to end up. According to Russian media, she can not leave because she has to do hours of punishment service.

In 2016 Alyokhina developed with music producer Alexander Cheparukhin and theater director Yury Muravitsky 'Pussy Riot Theater Riot Days', a performance that has already been played in other countries.