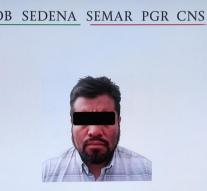 monterrey - Mexico has captured one of the founders of the notorious Los Zetas drug cartel for the second time. Reported that the Mexican security agency Friday.

It involves Luis Reyes Enríquez, who was arrested in the north of the country near Monterrey. He is held responsible for organized crime and drug trafficking.

Reyes Enríquez had since April 2015 on the loose. He was arrested in 2007 and sentenced to a prison term of almost 48 years. The sentence was reversed by a judge for technical reasons. The Prosecution drew upon successful appeal, making 'Z-12' must still humming.


Los Zetas is the late nineties emerged from figures who belonged to elite troops of Mexican and Guatemalan police and army, but who sought a new life as mercenaries for drug cartels. The Zetas are going to outflank their employers over the years in crime and in cruelty. It was a cartel itself.