Home / World / 'Formerly no weapons US to Gulf States' 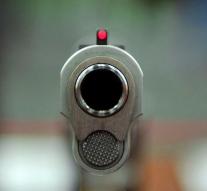 washington - The Republican president of the US Senate Commission for Foreign Affairs wants to temporarily suspend the sale of arms to Saudi Arabia, Qatar and other Gulf States. Senator Bob Corker said Monday that arms deliveries are not justified now that tensions between Qatar and other countries in the region have occurred.

Corker said the crisis had to be resolved first. 'It would be a productive step if those countries were sitting together,' said the senator.

The surrounding countries have recently broken the economic and diplomatic ties with Qatar. Saudi Arabia, the United Arab Emirates, Egypt and Bahrain accuse the oil state of inter alia tied up with terrorist groups.

The neighbors want, among other things, that the government in Doha maintains less close diplomatic relations with archival rival Iran and Al-Jazeera news channel. Qatar initially responded negatively to the requirements, which makes the conflict appear to be firm.

The battle between the countries is a thorn in the eye. Washington is an ally of Saudi Arabia, but also has a great base in Qatar.