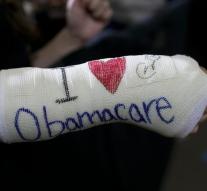 - Donald Trump wears Tom Price for the Minister of Health. With its choice of Deputy of Atlanta, who was formerly an orthopedic surgeon, the next president of the United States makes it clear that he is serious about the removal- or at least radically change- ObamaCare.

Price is a strong Republican opponent of the Health Insurance Act which outgoing President Barack Obama signed in 2010. Even before the law was a fact, the former surgeon came up with alternatives. This he differed from many other Republicans, who like him were fiercely opposed to the current law, but did not really know how or need.

During the campaign, Trump said he wants less interference from the federal government and more control for the states. Although he first called for complete abolition, Trump hinted after a meeting with Obama that he wants to share yet retain the law.

Reforming health care is one of the main domestic successes of Obama's presidency. Since the implementation of Obamacare decreased the number of uninsured Americans by about 49 million to 29 million. But Republicans abhor government coercion. Price argued in its earlier proposals for a system where tax breaks and special savings accounts for health care play an important role.

Price as minister will work closely with Seema Verma, who is going to lead to Medicare and Medicaid, the two major health care programs. Verma has experience with the bureaucratic side of care. In the state of Indiana, they advised Governor Mike Pence, the upcoming vice president.