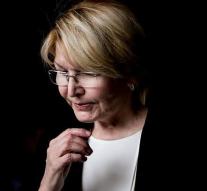 She arrived with a private plane from Aruba in the capital of Bogota, so the immigration service confirmed. It is still unclear whether she has applied for political asylum.

Ortega acts as a political opponent of President Nicolás Maduro. In August, she was released as her supreme judicial authority by Venezuela's new constitutional assembly. According to government opponents, it would only be called for extermination of the opposition. Ortega had announced shortly before examining the controversial election of the constitutional assembly. That only consists of Maduro fans.

She said she was afraid of her life after her resignation. Despite a imposed travel ban, she managed to flee her country and flee to Aruba, in the company of her husband and MP Germán Ferrer. Her husband was accused by the authorities of heads of a corruption network that would have hidden money on foreign bills. Against Ferrer, an arrest warrant ran.

Ortega belonged to the intimidation of the socialist leaders in Venezuela for a long time and supported the government's politics. However, she broke with Maduro when the president carried out measures in contravention of the constitution and took all power. Ortega accuses Maduro of smashing the legacy of the deceased President Hugo Chávez and wanting to settle a dictatorship.