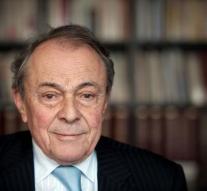 - The former French Prime Minister Michel Rocard is Saturday at the age of 86 deceased. That French media reported. Rocard was prime minister in 1988 to 1991 François Mitterrand as president. He died in a hospital in Paris.

Rocard, who in the eighties Minister of Planning and Agriculture, was a prominent member of the Socialist Party. After the great defeat of his party in the parliamentary elections of 1993, he was party chairman a short time.

Rocard was as convinced European member of Parliament. In 2009 he took leave there. From 1995 to 1997 he was a member of the French Senate.