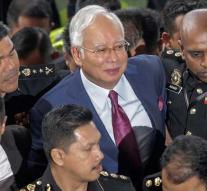 kuala lumpur - Former Prime Minister Najib Razak of Malaysia was officially indicted on Wednesday for obscuring hundreds of millions from the 1MDB state fund. On Tuesday, Razak was arrested, Wednesday he declared to be innocent before a court in Kuala Lumpur.

In house searches at the end of May, almost 275 million dollars worth of luxury goods was seized. The authorities needed three days to count the seized banknotes. Around 21 employees of the central bank and 11 money counting machines were used to get the job done. The police also called on experts to determine the value of the luxury goods found.

Razak was Prime Minister of Malaysia from 2009 to May 2018. In May he lost the election of the elderly senior government leader Mahathir Mohamad.