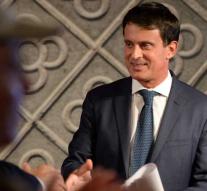 barcelona - The ex-premier of France Manuel Valls wants to succeed his left-wing kindred spirit Ada Colau as mayor of Barcelona. The 56-year-old socialist spoke out this ambition at a press conference Tuesday, first in Catalan and then in Spanish. There has been speculation about his candidacy for months. The election is on May 26, 2019.

Valls was born in Barcelona in 1962 as the son of a Swiss mother and Spanish father. He also received French nationality in 1982 and was prime minister under President François Hollande in his second homeland from March 2014 to December 2016.

' My father left Barcelona in 1949 but never distanced himself from his mother tongue and his culture. At our home, the Spanish Civil War was often the subject of conversation. And that always went into Catalan, 'said Valls, who is fiercely against the separation of Catalonia.