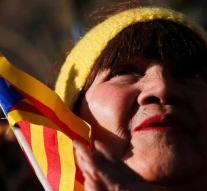 barcelona - The ex-premier of Catalonia, Carles Puigdemont, told the Catalan broadcaster that it is best possible to lead the regional government from Belgium. It is much easier to hold that function in Brussels than in a Spanish cell, according to Puigdemont. The Spanish judicial authorities are looking for him because of a series of offenses committed when he, as the regional prime minister, wanted to separate Catalonia from Spain in October with an illegal referendum.

Catalonia was taken over by the Spanish government on 27 October, which held elections in December. The power relations in the regional parliament have hardly changed in this ballot box.

Just like in 2015, the separatists and their extreme-left ally CUP (Kandidatuur Volkseenheid) received approximately 47.5 percent of the votes. And through the electoral system they acquired a majority again in the 135-seat parliament. Puigdemont's PDeCat (Democratic European Catalonian Party) and the ERC (Republican Left) of incarcerated ex-deputy prime minister Oriol Junqueras now have 66 seats together and the CUP four. The separatists prefer to repair the government that was deposed in October.