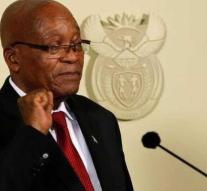 johannesburg - Former South African president Jacob Zuma has to appear before the judge on April 6. The authorities prosecute him for corruption. The lawyer of Zuma confirmed on Monday that he had received a summons for his client.

The presidency of Zuma, who was plagued by scandals, ended last month. He stepped in after he had lost the support of his own party, the ANC. The justice authorities then announced that they would prosecute Zuma for an alleged bribe affair from the nineties.

The lawyer of Zuma did not want to say how his client will respond to the summons.