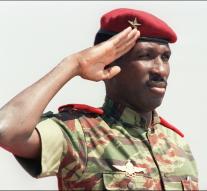 ouagadougou - Justice in Burkina Faso is nearly three decades after the assassination of President Thomas Sankara finally hunt for the perpetrators. Against the main suspect is now issued an international arrest warrant: former President Blaise Compaoré.

The murder of Sankara was one of the most notorious political assassinations perpetrated in recent decades in Africa. After the murder in 1987 Compaoré took power in the West African country. He made the service until he himself was deposed last year by a popular uprising. Compaoré fled to Ivory Coast, where he probably still is now.

Incidentally, it was also assassinated president Sankara came to power in 1983 through a coup. His body was exhumed earlier this year. From autopsy found that it was riddled with bullets.