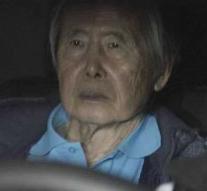 lima - Alberto Fujimori, the former president of Peru, has to appear again in court. He is being prosecuted for the murder of six farmers in 1992 when he led the country.

That reports the BBC. The 79-year-old Fujimori has been free since a month. He had previously been convicted of fraud and crimes against humanity during his right-wing government from 1990-2000. Last Christmas he was granted pardon by President Pedro Pablo Kuczynski. Fujimori had to spend 15 years in prison from his prison sentence of 25 years.

The pardon was not well received by thousands of Peruvians, who took to the streets at the end of last year to explain their dissatisfaction. The pardon does not apply to the new case where he or she can handle 22 others.