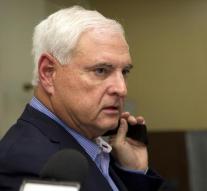 coral gables - The fugitive Panamanian President Ricardo Martinelli has been arrested in the US state of Coral Gables in Florida state, according to the US police. He is being searched by Panama for espionage. He would have used government money to spy more than 150 political rivals in the period 2009-2014 when he was president.

The stone-rich businessman left Panama with a private jet in January 2015. Earlier this week he was already reported in the US at a football match of his country's national team, who played in Argentina at Copa America.

Panama wants Martinelli to be delivered. Interpol also has an arrest warrant.