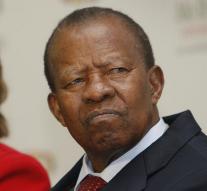 gaborone - Former president Ketumile Masire of Botswana died at the age of 91. He played as a head of state a key role in transforming his country into a relatively stable democracy, while other states in the region were fighting corruption and war violence.

Masire resigned powerfully in 1998 after eighteen years as president of the South African country, the world's largest diamond producer. He was the second Botswana president since the country became independent of the United Kingdom in 1966.

The former president has been on the intensive care of a hospital in Gaborone, Greece last Friday. He passed away on Thursday. 'He died peacefully and surrounded by his family in the hospital,' said Masire's secretary on Friday.