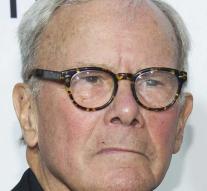 - Former NBC host Tom Brokaw was accused of sexual abuse on Friday. Linda Vester would have been harassed by the TV personality in her twenties. In the meantime, 65 people from the TV industry have written a letter in defense, including Schwarzenegger's ex-wife Maria Shriver. This reports The Guardian.

The woman who accused Brokaw worked as a war correspondent for NBC News. Linda Vester says that the newsreader has tried to kiss her twice and inappropriately sought sexual advances. 'He took me in my neck and tried to force me to kiss him. I was shocked when I noticed how strong he was. He was the most powerful man in the channel and I was the most inexperienced. 'She says that Browak left when she came under his grasp and she let him know that he had to leave her alone.

Brokaw (78) denied the accusations and said that he only met Vester twice when she asked him about her career with the sender. According to him, these encounters were short and formal. In several e-mails to friends, he complains about what was done to him 'in what I thought was the last phase of my work and life'.

In the meantime, he has received support from 65 women in the American television industry who drafted a letter in defense. Among them is former NBC journalist Maria Shriver, for years- and on paper still- the wife of Arnold Schwarzenegger. They write that Brokaw has always treated them with honesty and respect, gave them opportunities to move forward with their careers and has welcomed their successes. 'He is a man with enormous decency and integrity. '