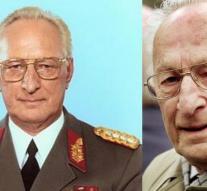 berlin - A former GDR minister who was co-responsible in the late 1980's for the extinction of refugees who wanted to go west has died. Former Minister of Defense Heinz Kessler died at the age of 97 in Berlin, German media reported Thursday.

Kessler waved the scepter about the East German Ministry of Defense from 1985 to 1989. Because under his rule people were killed at the border, he was sentenced to 7.5 years of cell after the fall of the Berlin Wall. He was only partially excluded because of health problems. Kessler has always denied that he was guilty of the death of refugees. He also continued to defend the socialist state.

The German former minister came from a communist family. During World War II he was forced to fight in the German Wehrmacht, but after the German invasion of the Soviet Union he went over to the Red Army. He tried to convince other soldiers to do the same as a propaganda maker.

In Communist East Germany he was a powerful figure as minister and member of the police office.