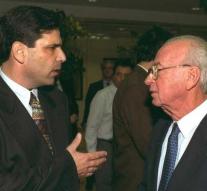 jerusalem - The former Israeli minister of Energy Gonen Segev has been charged with espionage for Iran. Employees of Israeli security services reported that Segev had been spying on the Tehran regime since 2012.

He would have met Iranian secret agents at various places in the world. He would also have been to Iran twice. Israel suspects Segev among others of providing information to Iran about the Israeli energy program, safety installations and people who were politically active.

Segev was Minister from 1992 to 1995. A court in Tel Aviv condemned him in 2005 to five years in prison for falsifying a passport and smuggling xtc from the Netherlands to Israel, according to the Israeli newspaper Haaretz.