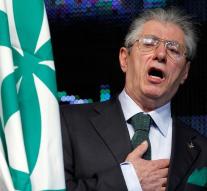 milan - Umberto Bossi, founder of the Northern Italian party Lega Nord, was sentenced to two years and three months in prison on Monday for improper use of party money. His son Renzo got eighteen months while Francesco Belsito, the former treasurer of the party, has to sit for two years and six months.

Bossi (75) would have used party money for private purposes. Another son, Riccardo, passed away last year and received twenty months.

Because of the scandal, Bossi, a political ally of former Prime Minister Silvio Berlusconi, had to resign as leader of the Lega Nord in 2012.