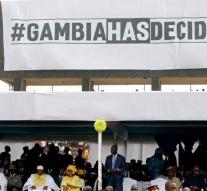 banjul - The former chief of the National Intelligence Gambia was arrested. It is the first arrest of a senior official since the inauguration of the new president Adama Barrow.

According to human rights organizations, was the intelligence service headed by the former president, Yahya Jammeh, responsible for torture and murder of political opponents of the head of state.

Jammeh put the intelligence after he came to power through a coup in 1994. Barrow, who defeated in elections in December Jammeh, the powers of the service has greatly reduced and the organization renamed.