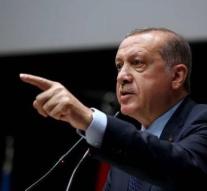 istanbul - The Turkish police arrested 53 former employees of the Istanbul Stock Exchange on Friday. According to the newspaper Habertürk, they are suspected of ties with the movement of Islamic spiritual Fethullah Gülen.

Agents invaded seventy addresses early in the morning. They sought suspects who were taken out of office after the failed coup last year. The Turkish authorities think that the Gülen network is behind that coup attempt. The spiritual denies that.

The Turkish police arrested about 49,000 people for the coup attempt. Also, around 145,000 people are fired or suspended. These include officials and academics.