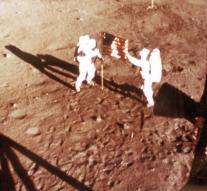 london - Former astronaut Buzz Aldrin is a precaution evacuated from the South Pole, after he became ill. White Desert tour announced on Thursday that the state of the American is stable and a doctor treating him, the BBC reported.

Aldrin was in 1969, the second man to set foot on the moon, after his colleague Neil Armstrong. He retained his wanderlust; with his 86 years he was a tourist in Antarctica. Aldrin visited an American research center.

The US National Science Foundation announced that it had arranged a flight for the former astronaut. he is brought to New Zealand via another research station.

Aldrin had on Monday enthusiastically tweeted a picture of herself from Cape Town, which he wrapped in a T-shirt with the planet Mars it was ready to board the plane. 'South Pole, I'm coming!'