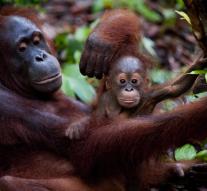 jakarta - Orangutans in the Indonesian islands of Sumatra and Borneo are threatened by the continuing forest fires there. To escape the suffocating smoke flee to open country, where they can be shot at risk.

As with people, especially the young risk run by the smoke. At a reception center on Borneo sixteen infant monkeys cared because they have inhaled smoke. " They get the flu, diarrhea and coughing, and without help they will succumb within two weeks ", said a spokesman for the Australian ABC. The animals must remain within to recover, but it they get stressed.

The smoke in the province of Central Kalimantan 's been three months very close. Visibility is controlled less than 50 meters and an estimated half a million people have breathing problems due to the fires.