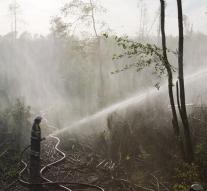 palermo - Large forest fires threaten the capital of Sicily, Palermo and other cities nearby. Several houses have already fallen prey to the flames and evacuated many residents, according to Italian media on Friday.

A girl had to be rescued from a burning house while fifty younger children had to go to a hospital from a nursery in Monreale after they had inhaled smoke.

Palermo have been evacuated several residential areas, reported ANSA news agency. The motorway between Palermo and Messina is closed by the fire. Also closed the highway between Lascari and Cefalù.,, We are facing a dramatic situation, '' said Mayor Lapunzina Rosario from the coastal town of Cefalu.

Motorist looking for a fight on A27


Although the cause of the inferno's has not yet been established, many forest fires in Sicily deliberately lit every summer, according to ANSA News.