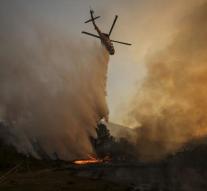 - The California wildfires which already afflict some time, are expanding. The authorities have deployed thousands of firefighters to fight the fire.

The large-scale deployment of people can not prevent dozens of houses went up in flames and thousands of people have been beaten on the run. The area around Santa Clarita, north of Los Angeles, has been severely affected. There was lost include 13 000 hectares of land. In Big Sur, the coastal area between Los Angeles and San Francisco, the flames threaten more than 1,650 houses, according to the fire-fighters.

The US space agency NASA gave satellite images of affected areas free. A large area of ​​nature appears completely blackened and also from a great height you can see the smoke that the fires are associated.