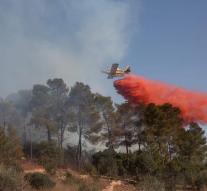 - The fires that have plagued Israel for nearly a week are virtually over. In the Jerusalem area, there are scattered still some fires due to dry weather with strong winds, but they pose no threat anymore. Israeli media reported Sunday that at least 35 people have been arrested, mostly Palestinians, who are suspected to have anything to do with the origin of the fires. The authorities maintain that the fires are ignited.

The Israeli government has moved to a weekly session Sunday and to Haifa. From that city last Thursday were an estimated 60 000 people evacuated after burning many districts had reached the city. Between four and six hundred houses or apartments have been destroyed by fire. Ministers will look at the damage and the Minister of Finance is considering what support is made available to those affected.