Home / World / Forest fires are not yet congested in Portugal 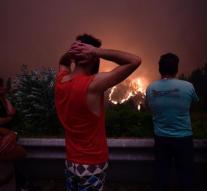 lisbon - The forest fires in Portugal are still not under control, fighting is difficult because the firemen are exhausted completely after two etching quenches and it is still hot and dry.

That says district commissioner Elísio Oliveira, who is responsible for combating forest fires against the newspaper Público. 'There are many hours of extinguishing and it is difficult to find replacement for the firefighters. '

According to the Portuguese newspaper, there are still 2000 firefighters involved in forest fires, a total of 685 vehicles were used. The biggest fire is still raging at Pedrógão Grande, the place where Saturday broke out. The Portuguese are helped by the Spanish Fire Department.

Since Sunday there has been a three-day period of national mourning in Portugal. That mourning can also be seen on the front pages of the newspapers. Some of them look like a mourning ad with a lot of black and white.