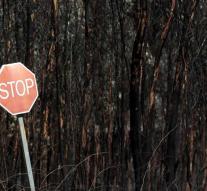 lisbon - The destructive forest fire that has been raging in the Algarve for a week is on its way. A spokesperson for the Portuguese population protection service said that the intensity has decreased and 'there are no more active fire fronts'. In addition to the efforts of more than 1400 firefighters, military personnel and volunteers, this is also due to a weather change. The temperature on the south coast dropped significantly, to around 25 degrees.

However, the fight has not yet been fought. Because there are several 'hot spots', the flames can flare up again, especially when the wind is increasing. Prime Minister Antonio Costa warned 24 hours earlier that it could take days before the fire would be under control. The digging of firebreaks with bulldozers has been successful during the night hours. That work goes on Thursday night.