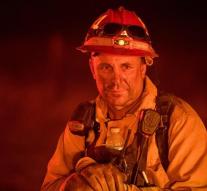 sacramento - In California, a forest fire blocks one of the access roads to the famous Yosemite Natural Park. Highway 41 was closed on Thursday due to the fire seas between Oakhurst and the national park. Over three hundred firemen fight the flames. Their work is hampered by the summer heat and the drought.

In July, the Mariposa County district, also not far from Yosemite, was quenched by a natural fire. Dozens of houses were laid in the ashes. The Yosemite Valley, famous for its granite rock walls and waterfalls, attracts more than 3 million visitors each year.