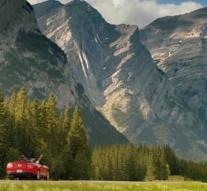 calgary - A Canadian man drives his car from Calgary to Vancouver to work. That is a distance of 1000 kilometers. After his work, he drives back. Ted Clark works as a specialized coffee maker in the fashionable Mount Pleasant, Vancouver.

Clark could not find a job in Calgary and was pleased with the job in Vancouver. But the fathers and his wife did not want to give up their familiar lives in their city. The coffee maker travels up and down three times a week. On Friday he runs a double service in Vancouver and sleeps him in his car. All of this allows him to be home to wife and child at the weekend.

To kill him a bit during the 10-hour drive, he works in the car for a telephone company and calls potential customers. He drives over 5800 kilometers a week. Gasoline is a lot cheaper in Canada than in the Netherlands. Clark thinks about 330 euros each week.