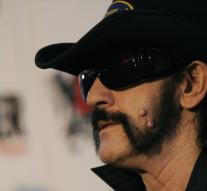 - The singer and bassist of the famous British heavy metal band Motörhead is deceased. Ian 'Lemmy' Kilmister was recently hit by an aggressive form of cancer and has lost the battle after a short illness. He was 70 years old.

On December 26 was told the musician that he had cancer. That was two days after his birthday. The band has announced the death on her Facebook page. We can not express the shock and grief. There are no words for. But for now: play hard Motörhead off please. And take a drink, or more.. That Kilmister would namely have exactly as wanted, the band says.

The Motörhead frontman founded in 1975. With the band he celebrated the fortieth anniversary this year. Previously, he was a member of the band Hawkwind. In his youth he was a roadie for Jimi Hendrix. He stood apart for his growling voice famous for its liquor (especially whiskey) and drug use. The Englishman, who lived in Los Angeles, was also controversial because of his collection of Nazi artifacts. Long before he got cancer he struggled with all kinds of health problems. For this reason, the band had to cancel several performances last month.