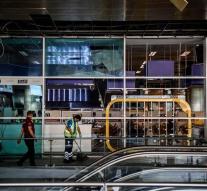 - Among the 36 people killed by the attack on the Ataturk airport in Istanbul are in any case a person from Ukraine and one from Iran. Which have had officials from both countries know.

Among the 147 wounded seven people from Saudi Arabia. Most victims are Turks, as the authorities released already know. Whether Dutch are among the victims is not yet clear.