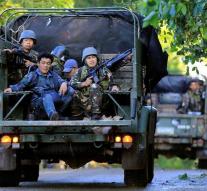 marawi - In fighting between the army and extremists in the Philippine city of Marawi, various foreign terrorists were involved. That has told a Filipino army spokesman Friday. Among the killed jihadists were Indonesians and Malaysians.

The extremist group Maute, who earlier marched to the Islamic State terrorist group, occupied large parts of the city and burned several buildings. This happened after a failed collapse of security forces in one of their shelters. It was first assumed that it is about local terrorists, but the group appears to be a more international and a fierce opponent.

The Philippine army sent about one hundred soldiers with helicopters to Marawi on the southern island of Mindanao. The fights have so far been living for at least 46 people.