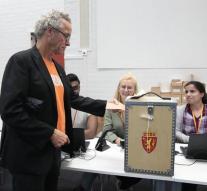 oslo - The parliamentary election in Norway seems to be a success for the conservative government of Prime Minister Erna Solberg.

According to a first forecast immediately after the polling stations have closed, the Social Democratic Labor Party of Opposition leader Jonas Gahr Støre is just the biggest, but left is no longer a majority coalition.

According to the Norwegian constituency, Solberg can count on 88 of the 169 seats with the support of its partners. The right-wingist party of Right led the right-populist party FRP a minority cabinet over the last four years. That was tolerated by the Christian KRF and the Liberal Party Left. That combination remains possible. In the forecast of TV2, based on its own poll, the government coalition even gets 91 seats.