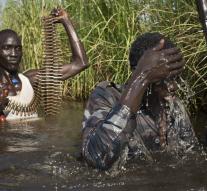 - Parties in the civil war in southern Sudan have been guilty of atrocities. A report by the African Union describe witnessing massacres in the capital Juba how people were forced to drink the blood of kill or eat roast human flesh.

In addition, mention is made ​​of rapes and mutilations in the northern town of Bentiu. Limbs were severed or crushed. Impartial researchers from the African Union were also hear stories about cases of kidnapping, brutal beatings and torture.

The ethnically motivated power struggle between the South Sudanese President Salva Kiir and his deposed deputy Riek Machar end of 2013 broke out. The violence, tens of thousands of people died and more 2.2 million people displaced. In August came to a peace agreement, but is nevertheless still there fighting.