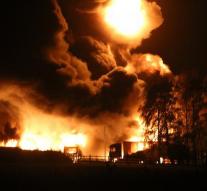 someren - It may take several weeks before the fire in a tire storage in Someren-Heide is fully extinguished. The municipality of Someren let it know Wednesday in an update of fighting the fire that broke out early Sunday morning.

The fire is difficult to extinguish because of an impervious crust forming on the molten rubber from the tires. It is therefore difficult to fight the fire and the heat with water or other extinguishing agents.

The fire department has tested several options to extinguish the fire quickly but without much success. At this time, it has been decided to excavate the molten rubber part by part and cooling in water. ' We are working with might and to limit the consequences and impact of the brand, 'the congregation.