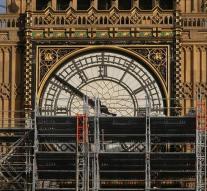 london - Christmas will not be a quiet night for the Big Ben in London. Despite the restoration of the tower, the famous bells will be the whole Christmas season, reports the Sunday Times. Originally, this would only be on New Year's Eve and on some other special occasions.

Big Ben is actually the name for the heaviest of the five clocks in the 96-meter-high Elizabeth Tower, which is on the Thames. In general, the whole tower is called so.