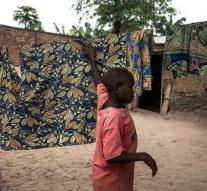 geneva - More than two million children in the Democratic Republic of Congo are threatened by starvation. They need immediate help, the United Nations warned Friday.

A senior UN envoy will meet with donors in the country next week, where the situation is becoming increasingly serious in many areas. 'We have a heavy responsibility in the DRC. We have to continue now ', said a spokesman in Geneva.

The Kasai region in particular has been hit hard. There threatens famine for 300,000 children.

In Congo there has been a war between the government army and rebel forces for two years. As a result, 1.5 million people have become homeless, including a large number of children.