Home / World / Football supporters on the field in Paris 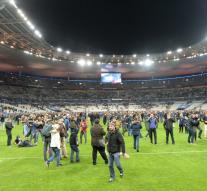 - The spectators at the exhibition game Friday between France and Germany in Paris after the final whistle incurred the field. During the match went near the Stade de France multiple bombs. The booms were heard in the stadium. Despite the friendly match between France was the organizer of the upcoming European Championships and World Champion Germany continues.

French President François Hollande was the clash persuaded by his guards out of the stadium and brought to safety at the Ministry of Foreign Affairs. For other attendees visited the gates of the stadium closed. The spectators, who through the social media heard of the attacks in Paris, decided after the final whistle to walk on the field.

" We are all shocked and distraught ", said Germany coach Joachim Löw. " It's wait and see what will happen. "