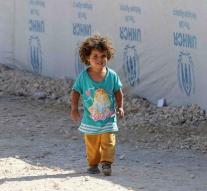 - Netherlands provides food aid to around 60,000 Syrian refugees stuck in no man's land between the borders of Jordan and Syria.

Minister Ploumen (Foreign Trade and Development) has decided on the request of the UN World Food Programme (WFP).

Syrian refugees are no longer in Jordan after an attack on Jordanian border guards last month. However, the Jordanian government sets the limbo briefly opened for humanitarian aid.


Minister Lilianne Ploumen says the refugees are deprived of all basic needs.,, People are likely to become malnourished and suffer from possible diseases. Now, the opportunity to help occurs, we must grasp immediately. ''

The Netherlands is making an additional contribution of 400 000, so as to give more food aid.