Home / World / Followers of Merkel are in the starting blocks 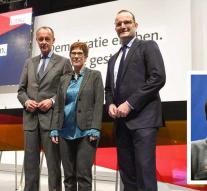 lubeck - The three possible candidates who compete for the German chancellor Merkel to join the conservative CDU are eagerly awaiting. At the election rally in northern Lübeck, they were officially presented to members of the party for the first time on Thursday. According to the latest opinion poll, Secretary General Annegret Kramp-Karrenbauer, nicknamed AKK, has the greatest opportunities.

The old industrial hall in the Hanseatic city was well filled with eight hundred people. Many members were disappointed that Merkel's Christian Democrat party lost many voters in recent years, especially after the refugee crisis in 2015. 'Our party must once again become the party of internal security,' the former prime minister of Rhineland-Palatinate stated. She is the favorite successor for current CEO Merkel.