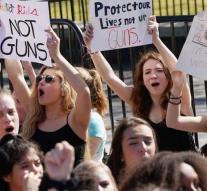 parkland - The US state of Florida has adopted a package of measures to make the weapon legislation stricter. The minimum age for procuring guns has been increased to 21 years and there will be a mandatory waiting period of three days for all firearms sales. Moreover, it is now permitted for specific school staff to carry weapons.

The law was quickly implemented after the shooting three weeks ago at a school in Parkland where seventeen people were killed. This was followed by a major campaign for tougher weapons legislation, to which US President Donald Trump also joined. Trump suggested that teachers who are armed might prevent a massacre. The new legislation does not go that far. Only certain (trained) personnel may be armed under strict conditions.

The adopted bill is not as strict as desired by many students and their parents. They would like to see that semi-automatic weapons, used by the shooter in Parkland, would be banned. Proponents of the proposal say that most guns at schools use hand guns, for which you have to be 21 years old in Florida to buy them.

Soon the age limit will also apply to (semi-automatic) guns. A waiting period of three days therefore applies to all firearms and the mandatory background check must have been carried out. For example, it is no longer possible to walk straight out of the store with a purchased weapon.

The bill also prohibits so-called 'bump stocks'. This allows a semi-automatic rifle to be converted into an automatic rifle. A 'bump stock' had been used by the perpetrator of the Las Vegas massacre last year, killing 58 people.

The law will be implemented within fifteen days. Only the governor of Florida can still stop the law.

The nineteen-year-old shooter of the shooting in Parkland, Nikolas Cruz, was officially charged with the seventeen-fold murder on Wednesday. Fourteen students and three teachers were killed. The lawyer of Cruz has indicated that his client wants to confess guilt but only if he does not receive the death penalty.