Home / World / Florence further weakened, danger did not go away 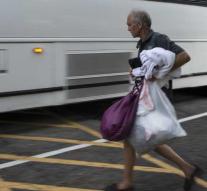 columbia - Hurricane Florence has further weakened on the way to the American coast. It is now a storm in the second category, reports the National Hurricane Center (NHC) in Miami. Nevertheless, heavy rainfall and possible flooding are still taken into account.

Florence is currently a few hundred kilometers from the coast. The storm is expected to arrive early Friday morning in the state of North Carolina. The authorities have made great alarms there. 'My message is clear: disaster is imminent', said Governor Roy Cooper Wednesday.

The storm has already disrupted public life on the coast. The authorities have ordered more than one million inhabitants to leave coastal areas in North and South Carolina and Virginia. At least 7,000 people have sought refuge in emergency centers in North Carolina.

Account is also taken of large-scale power outages due to the severe weather. According to the energy company Duke Energy, this can affect up to three million households.