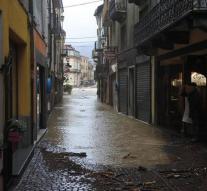 - Northwest Italy suffers as a result of heavy rainfall by flooding. In the regions of Liguria and Piedmont applies the highest level of alert, red. At the border town of Ventimiglia since the flooding of the Roia missing a Nigerian refugee, reported the Italian news agency ANSA on Thursday.

In Piedmont the Tanaro river turned into a swirling stream. In the town of Ormea, near Cuneo, the earth broke because of the river open violence. Three cars disappeared into the gorge.

In the Liguria region continued to schools and universities Thursday include Genoa, Savona and San Remo closed. Also deleted many public activities. Red Alert is certainly until Friday morning on the Ligurian coast.