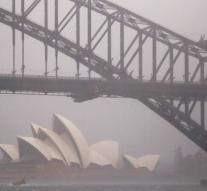 sydney - In the Australian city of Sydney persistent storms caused flooding. In the morning there was as much rainfall as normal in the entire month. Dozens of flights have been canceled. The police have called on motorists not to take the road. Because of the rain and floods, the morning peak degenerated into chaos.

Over 8,000 people were temporarily without power. One person was killed in a car accident during the storm and two police officers were seriously injured when a tree fell on them while they were helping a car driver.

Rain was welcome for agriculture. It has been very dry in the region in recent months. In the northern part of Queensland it is still dry and hot. There the fire service is still fighting forest fires.