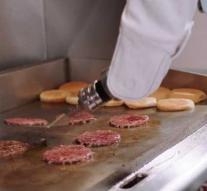 - The culinary robot named Flippy goes to work in the American burger chain CaliBurger. The subsidiary of the fast food restaurant in Pasadena is currently focusing on curious customers, because the machine is not very cheap.

For the time being, Flippy, developed by Miso Robotics and the owner of the American chain CaliBurger, can only bake burgers. Later the machine must also be able to roast chicken or cut vegetables.

Flippy is a kitchen assistant that runs entirely on artificial intelligence. For the time being, Americans do not have to worry about their job yet. Not only does Flippy need a lot of help from human hands, the machine is also quite pricey. With 60,000 dollars per robot and 12,000 euros in annual maintenance costs, regular employees are a lot cheaper for the time being.

The branch of CaliBurger hopes that interested people will enjoy baking a hamburger baked by a robot. Ultimately, the company wants to deploy the fast food robot, which fires 150 hamburgers per minute, at all locations.