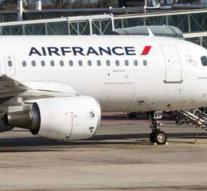 caracas - Airlines Air France and Iberia delete flights to Venezuela in the coming days. Sunday inconveniences are expected because of the election to elect a 'constitutional assembly'.

Iberia announced that a flight scheduled for Sunday between Madrid and the Venezuelan capital, Caracas, was removed for security reasons. Travelers can fly with Venezuelan Airlines at the earliest on August 2nd.

Air France said in a statement to French media that no flights are being carried out from Sunday to Tuesday. 'The safety of customers and employees is a priority,' said the company. Previously, other airlines also stopped flights to the South American country.