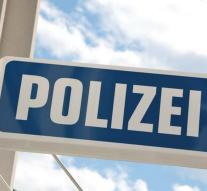 oldenburg - An attempt by a German to escape the police, has ended in a conspicuous place. The 25-year-old man crashed on the night of Wednesday to Thursday calculated against the gate of a police station. He was slightly injured and was arrested.

Officers saw the man driving on a highway near the city of Oldenburg and decided to check him. But the man hit the gas and drove,, at high speed and reckless '' through the village. Ten police cars were involved in the hunt for the man. Eventually his Mercedes to the police station to a standstill. In the trunk saw officers why he did not want to be controlled: there was a kilo of marijuana.