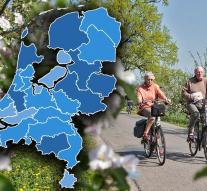 - Five times a week a half-hour 'moderately intensive' move: 63 percent of the Dutch get this move directive. Figures show that one region is more sporty than the other. For example, the percentage in Flevoland is 55.5 percent below average.

See the interactive map with regional differences at the bottom of this article.

Under the heading of 'healthy movement', the Health Council has for some time been doing activities such as hiking, cycling or skating. And that's definitely five times a week.

The advisory board of the Ministry of Health, Welfare and Sport (VWS) recently presented new roadmap guidelines for all Dutch people. For this reason, we have charted how much we are moving. LocalFocus data platform set these results in a row.

The figures show that the percentage of residents moving according to the 'old norm' differs from 55 to 67 percent. For example, just over half of the 19-year-olds in Flevoland move for at least half an hour a day. In the regions of Holland North (including Alkmaar and Den Helder), Twente, North and East Gelderland and Zeeland, this share is 67 percent the highest in the country.

For the new Health Council, two and a half hours (150 minutes) per week stay in moderately intensive pursuit, but that movement does not necessarily have to be divided into five days. The minutes may also be combined with short-term activities.

View the interactive map with regional differences. Do you look on mobile and do not load the card? Then click here.